To be willing is to be able. ~ French Proverb

If you want to build high, you must dig deep. ~ Mongolian Proverbs

If you plant grass, you won’t get rice ~ Malaysian Proverbs

It takes a whole village to raise a child. ~ African Proverb

The world does not make promises to anybody. ~ African Proverbs

If you put in you can take out. ~ Yiddish Proverbs

One may go a long way after one is tired. ~ French Proverb

You’ve got to do your own growing, not matter how tall your grandfather was. ~ Irish Proverbs 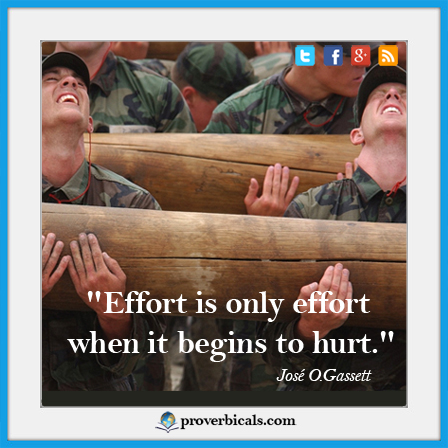 By his own efforts man could never gain the true and desired riches. ~ Joseph Franklin Rutherford

The greatest efforts in sports came when the mind is as still as a glass lake. ~ Timothy Gallwey

Of all the things I’ve done, the most vital is coordinating those who work with me and aiming their efforts at a certain goal. ~ Walt Disney Quotes

No one can be great, or good or happy except through the inward efforts of themselves. ~ Frederick W. Robertson

The jack-of-all-trades seldom is good at any. Concentrate all of your efforts on one definite chief aim. ~ Napoleon Hill

Effort is only effort when it begins to hurt. ~José Ortega y Gassett

God has no intention of setting a limit to the efforts of man to conquer space. ~ Pius XII

Do each daily task the best we can; act as though the eye of opportunity were always upon us. ~ William Feather

If you have enough push, you don’t have to worry about the pull. ~ Zig Ziglar Quotes

You can do only one thing at a time. I simply tackle one problem and concentrate all efforts on what I am doing at the moment. ~ Maxwell Maltz

In efforts to soar above our nature, we invariably fall below it. ~ Edgar Allan Poe

The efforts which we make to escape from our destiny only serve to lead us into it. ~ Ralph Waldo Emerson

God doesn’t require us to succeed; he only requires us to try. ~ Mother Teresa Quotes

Things will get better — despite our efforts to improve them. ~ Will Rogers

Whoever acquires knowledge but does not practice it is like one who ploughs a field but does not sow it. ~ Calvin Coolidge

It takes no more effort to expect the best, than to fear for the worst. It’s healthier, more productive, and a lot more fun. ~ Philip Hambert

Respect your efforts, respect yourself. Self-respect leads to self-discipline. When you have both firmly under your belt, that’s real power. ~ Clint Eastwood

What we hope ever to do with ease, we must learn first to do with diligence. ~ Samuel Johnson

Things don’t turn up in this world until somebody turns them up. ~ James A. Garfield

We forget that every good that is worth possessing must be paid for in strokes of daily effort. We postpone and postpone, until those smiling possibilities are dead. ~ William James

Nothing can come of nothing. ~ William Shakespeare

To despise all effort is the greatest effort of all. ~ John Fowles

The bitter and the sweet come from the outside, the hard from within, from one’s own efforts. ~ Albert Einstein Quotes

Try to forget yourself in the service of others. For when we think too much of ourselves and our own interests, we easily become despondent. But when we work for others, our efforts return to bless us. ~ Sidney Powell

No one can become rich by the efforts of only their toil, but only by the discovery of some method of taxing the labor of others. ~ John Ruskin

The one thing that matters is the effort. ~ Antoine De Saint-Exupery

Sufficient to each day are the duties to be done and the trials to be endured. ~ T.L. Gayler

You have to put in many, many, many tiny efforts that nobody sees or appreciates before you achieve anything worthwhile. ~ Brian Tracy

It is only through labor and painful effort, by grim energy and resolute courage, that we move on to better things. ~ Theodore Roosevelt Quotes

The struggle alone pleases us, not the victory. ~ Blaise Pascal

Prayer is not a substitute for work, thinking, watching, suffering, or giving; prayer is a support for all other efforts. ~ George A. Buttrick

Life does not require us to make good; it asks only that we give our best at each level of experience. ~ Harold Ruopp

Many a man has finally succeeded only because he has failed after repeated efforts. If he had never met defeat he would never have known any great victory. ~ Orison Swett Marden

Freedom from effort in the present merely means that there has been effort stored up in the past. ~ Theodore Roosevelt Quotes

Leadership is the key to 99 percent of all successful efforts. ~ Erskine Bowles

Do your duty that is best; leave unto the Lord the rest. ~ David O. McKay

Welcome the task that makes you go beyond yourself. ~ Frank McGee

Success is the sum of small efforts, repeated day in and day out… ~ Robert Collier

Without some goals and some efforts to reach it, no man can live. ~ John Dewey

If a man has done his best, what else is there? ~ George S. Patton

Art is the symbol of the two noblest human efforts: to construct and to refrain from destruction. ~ Simone Weil

If I could I would always work in silence and obscurity, and let my efforts be known by their results. ~ Emily Bronte

I’m a determined person. And if I’ve got an objective, I’ll make hours of sacrifice — whatever efforts are needed. ~ Gerald R. Ford

All that we do is done with an eye to something else. ~ Aristotle Quotes

About the only thing that comes to us without effort is old age. ~ Gloria Pitzer

Effort only fully releases its reward after a person refuses to quit. ~ Napoleon Hill

The best efforts of a fine person is felt after we have left their presence. ~ Ralph Waldo Emerson Quotes

Approach the game with no preset agendas and you’ll probably come away surprised at your overall efforts. ~ Phil Jackson

He only is exempt from failures who makes no efforts. ~ Richard Whately

Most achievements in science are to a certain degree group efforts. ~ Willard Libby

Continuous effort! not strength or intelligence, is the key to unlocking your potential. ~ Winston Churchill Quotes

Will you be satisfied with the fruit of your life’s work? Will the efforts you are making now bring you satisfaction when the things of time are receding, and eternity looms ahead? ~ Raymond L. Cox

Much effort, much prosperity. ~ Euripides

I want you to start a crusade in you life — to dare to be your best. ~ William Danforth

Be true to the best you know. This is your high ideal. If you do your best, you cannot do more. ~ Horatio W. Dresser

The power of a man’s virtue should not be measured by his special efforts, but by his ordinary doing. ~ Blaise Pascal

There are hundreds of tasks we feel we must accomplish in the day, but if we do not take them one at a time… we are bound to break our own physical or mental structure. ~ Ted Bengermino

There are only two stimulants to one’s best efforts: the fear of punishment, and the hope of reward. ~ John M. Wilson

We are very much what others think of us. The reception our observations meet with gives us courage to proceed, or damps our efforts. ~ William Hazlitt

I honestly believed I would make it. I had the desire. A lot of people have the ability, but they don’t put forth the effort. ~ Joe Carter

Do your best every day and your life will gradually expand into satisfying fullness. ~ Horatio W. Dresser

Whatever you do for the sole purpose of having others admire you, your efforts will most likely be in vain. ~ Dave Pelzer

Always make a total effort, even when the odds are against you. ~ Arnold Palmer

Fanaticism consists in redoubling your efforts when you have forgotten your aim. ~ George Santayana

In all human affairs there are efforts, and there are results, and the strength of effort is the measure of the results. ~ James Allen

Men judge us by the success of our efforts. God looks at the efforts themselves. ~ Charlotte Bronte

You have to accept whatever comes and the only important thing is that you meet it with the best you have to give. ~ Eleanor Roosevelt Quotes

To be nobody but myself in a world which is doing its best, night and day to make me the same as everybody else means to fight the hardest battle any human being can fight and never stop fighting. ~ EE Cummings

They indeed are fools who are satisfied with the fruits of their past effort and do not engage themselves in self-effort now. ~ Swami Venkatesananda

There is so much to do, and I want to continue my efforts. ~ Janet Reno

Perhaps the best definition of progress would be the continuing efforts of men and women to narrow the gap between the convenience of the powers that be and the unwritten charter. ~ Nadine Gordimer

One is happy as a result of one’s own efforts — once one knows the necessary ingredients of happiness — simple tastes, a certain degree of courage, self-denial to a point, love of work, and, above all, a clear conscience. ~ George Sand

So get a few laughs and do the best you can. ~ Will Rogers

Men are convinced of your arguments, your sincerity, and the seriousness of your efforts only by your death. ~ Albert Camus Quotes