The most useful holy war is the one fought against your own passions. ~ Arabian Proverb

If Heaven made him, earth can find some use for him. ~ Chinese Proverb

Govern your passions, or they will govern you. ~ Latin Proverbs

The virtue of a woman does not go deep but her passion knows no limit. ~ Chinese Proverb

Our passions are the winds that propel our vessel. Our reason is the pilot that steers her. Without winds the vessel would not move and without a pilot she would be lost. ~ Traditional Proverb

The happiness in this life does not consist of being devoid of passion, but mastering them. ~ Saying

A man without passion is no son of Adam. ~ Iranian Proverbs

Who is strong? He who subdues his passions. ~ The Talmud

Passion is the trigger of success. ~ Saying 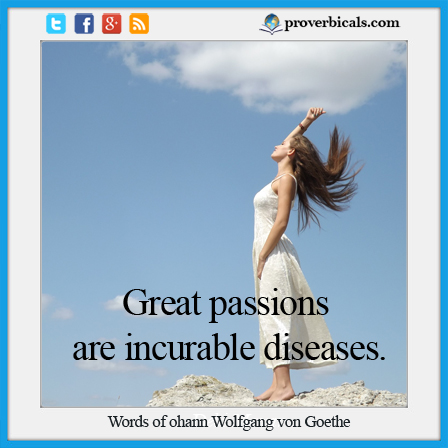 Man is only truly great when he acts from the passions; never irresistible but when he appeals to the imagination. ~ Benjamin Disraeli

Passion is like a ruin, which, in falling upon its victim, breaks itself to pieces. ~ Eliza Cook

The passions are like fire, useful in a thousand ways and dangerous only in one, through their excess. ~ Christian Nestell Bovee

The passions of men are commonly more potent than their reason. ~ Thomas Hobbes

Whereas the law is passionless, passion must ever sway the heart of man. ~ Aristotle Quotes

He who has no passion has no principal or motive to act. ~ Claude A. Helvetius

The worst of slaves is he whom passion rules. ~ Henry Brooke

There is in most passions a shrinking away from ourselves. The passionate pursuer has all the earmarks of a fugitive.~ Eric Hoffer

We must act out passion before we can feel it. ~ Jean-Paul Sartre

Who does not believe his first passion eternal? ~ William Makepeace Thackeray

Man is to be found in reason, God in the passions. ~ Georg C. Lichtenberg

Anyone who seeks to destroy the passions instead of controlling them is trying to play the angel. ~ Francois-Marie Arouet de Voltaire

Without passion man is a mere latent force and possibility, like the flint which awaits the shock of the iron before it can give forth its spark. ~ Henri Frederic Amiel

Let the sap of reason quench the fire of passion. ~ William Shakespeare

Passion is absolutely necessary to achieve any kind of long-lasting success. I know this from experience. If you don’t have passion, everything you do will ultimately fizzle out or, at best, be mediocre. Is that how you want to live your life? ~ Donald Trump Quotes

My passions were all gathered together like fingers that made a fist. Drive is considered aggression today; I knew it then as purpose. ~ Bette Davis

None, but people of strong passion are capable of rising to greatness. ~ Gabriel Riqueti Mirabeau

Nothing great in the world has been accomplished without passion. ~ Donald Trump Quotes

Only passions, great passions, can elevate the soul to great things. ~ Denis Diderot

Passion is the drunkenness of the mind. ~ Bishop Robert South

There are moments when our passions speak and decide for us … like a fire kindled within our being to which everything else in us is mere fuel. ~ George Eliot

It is the passions that do and undo everything. ~ Bernard Le Bovier Fontenelle

Passion doesn’t look beyond the moment of its existence. ~ John Christian Bovee

To know your ruling passion, examine your castles in the air. ~ Richard Whately

Chase your passion, not your pension. ~ Denis Waitley

Our headstrong passions shut the door of our souls against God. ~ Confucius Quotes

The most beautiful make-up of a woman is passion. But cosmetics are easier to buy. ~ Yves Saint Laurent

Only passions can raise a man above the level of the animal. ~ Andre Maurois

A willing heart adds feather to the heel. ~ Joanna Baillie

A man or a woman without passions is like a windmill in a calm–motionless, ghastly, useless. ~ Abraham Miller

The only sin passion can commit is to be joyless. ~ Dorothy L. Sayers

In music the passions enjoy themselves. ~ Friedrich Nietzsche

Strong as our passions are, they may be starved into submission, and conquered without being killed. ~ Charles Caleb Colton

Great passions are hopeless diseases. That which could cure them is the first thing to make them really dangerous. ~ Johann Wolfgang Von Goethe Quotes

The passions are the voice of the body. ~ Jean-Jacques Rousseau

Passions are vices or virtues to their highest powers. ~ Johann Wolfgang Von Goethe

Our passions are, in truth, like the phoenix. When the old one burns away, the new one rises out of its ashes at once. ~ Johann Wolfgang Von Goethe

Passions are the gales of life. ~ Alexander Pope

What our age lacks is not reflection, but passion. ~ Soren Kierkegaard

Passion is always suffering, even when gratified. ~ Marie von Ebner-Eschenbach

There is no greatness without a passion to be great, whether it’s the aspiration of an athlete or an artist, a scientist, a parent, or a businessperson. ~ Anthony Robbins

Passion costs me too much to bestow it on every trifle. ~ Thomas Adams

It is madness to think that we can fix an end to passions which we cannot control at their beginning. ~ Seneca

Passion, though a bad regulator, is a powerful spring. ~ Ralph Waldo Emerson Quotes

There is no passion to be found playing small — in settling for a life that is less than the one you are capable of living. ~ Nelson Mandela

If we resist our passions, it is more through their weakness than from our strength. ~ Francois De La Rochefoucauld

You can no more bridle passions with logic than you can justify them in the law courts. Passions are facts and not dogmas. ~ Alexander Herzen

Check your passions, that you may not be punished by them. ~ Epictetus

The passions are the winds which fill the sails of the vessel; they sink it at times, but without them it would be impossible to make way. Bile makes man passionate and sick; but without bile man could not live. ~ Voltaire Quotes

No passion so effectually robs the mind of all its powers of acting and reasoning as fear. ~ Edmund Burke

Men experience many passions in a lifetime. One passion drives away the one before it. ~ Paul Newman

A man who has not passed through the inferno of his passions has never overcome them. ~ Carl Jung

Everyone’s got to be passionate about something, or they’re not worth shit. ~ Joseph Finder

There is only one passion, the passion for happiness. ~ Denis Diderot

Every civilization is, among other things, an arrangement for domesticating the passions and setting them to do useful work. ~ Aldous Huxley

It is with our passions as it is with fire and water; they are good servants, but bad masters. ~ Roger L’Estrange

We may affirm absolutely that nothing great in the world has ever been accomplished without passion. ~ Georg Hegel

With men passion is all at the beginning and with women it is all along. ~ Anita Brookner

A strong passion for any object will ensure success, for the desire of the end will point out the means. ~ William Hazlitt

All passion becomes strength when it has an outlet. ~ George Eliot

Passion looks not beyond the moment of its existence. Better, it says, the kisses of love to day, than the felicities of heaven afar off. ~ Christian Nestell Bovee

I think if you find your passion and you go with it you are rewarded. ~ Kirby Larson

We are never like angels till our passion dies. ~ Thomas Dekker

When passion is dead, or absent, then the magnificent throb of beauty is incomprehensible and even a little despicable. ~ D. H. Lawrence

All passions exaggerate; and they are passions only because they do exaggerate. ~ Sebastien-Roch-Nicolas de Chamfort

He only employs his passion who can make no use of his reason. ~ Marcus T. Cicero

It would be beneficial for us to know what all our passions make us do. ~ Francois De La Rochefoucauld

He whom passion rules, is bent to meet his death. ~ Sir Philip Sidney

Passion makes the world go round. Love just makes it a safer place. ~ The Ice Opinion

Our passions do not live apart in locked chambers but dress in their small wardrobe of notions, bring their provisions to a common table and mess together, feeding out of the common store according to their appetite. ~ George Eliot

Passion is for holidays, not homecoming. ~ Jeanette Winterson

All passions are exaggerated, otherwise they would not be passions. ~ Chamfort

A man in passion rides a horse that runs away with him. ~ Thomas Fuller

Our passions are like convulsion fits, which, though they make us stronger for the time, leave us the weaker ever after. ~ Jonathan Swift

Our passion are the true phoenixes; when the old one is burnt out, a new one rises from its ashes. ~ Johann Wolfgang Von Goethe

The passions are the gales of life; and it is religion only that can prevent them from rising into a tempest. ~ Isaac Watts

Nothing is so intolerable to man as being fully at rest, without a passion, without business, without entertainment, without care. ~ Blaise Pascal

Passion is universal humanity. Without it religion, history, romance and art would be useless. ~ Honore De Balzac

Passion and prejudice govern the world; only under the name of reason. ~ John Wesley

We welcome passion, for the mind is briefly let off duty. ~ Mignon McLaughlin

Passion is the genesis of genius. ~ Anthony Robbins

Understanding should go first and find out the way, then passion should be as wings to carry us on in it. ~ Benjamin Whichcote

Men live by intervals of reason under the sovereignty of humor and passion. ~ Sir Thomas Browne