Whose stick, his buffalo.

When an elephant is in trouble even a frog will kick him.

When a camel is at the foot of a mountain then judge of his height.

Waste not want not.

Wash your hands in the flowing Ganges.

To give quickly is a great virtue.

Those who give have all things; those who withhold have nothing.

Sleep after selling horses and elephants.

Saints fly only in the eyes of their disciples.

Of what use is the veil if you are going to dance.

Never strike your wife, even with a flower.

Many dogs kill a hare, no matter how many turns it makes.

Like the body that is made up of different limbs and organs, all mortal creatures exist depending upon one another.

Kill a cow to donate shoes.

Help your brother’s boat across, and your own will reach the shore.

He who does kind deeds becomes rich.

Dig your well before you’re thirsty.

Dig a well every day to drink water every day.

Can’t tell his ass from a hole in the ground.

Can the monkey know the taste of ginger?

Anger has no eyes.

Among the blind, the squint rules.

A man in this world without learning is as a beast of the field.

A man becomes like those whose society he loves. 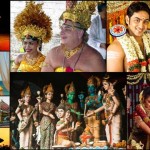 Hindu refers to an identity associated with the philosophical, religious and cultural systems that are indigenous to the Indian subcontinent. In common use today, it refers to an adherent of Hinduism. The two common forms that represent Hinduism are Shaivism and Vaishnavism.

Hinduism is the dominant religion of the Indian subcontinent, particularly of India and Nepal. It includes Shaivism, Vaishnavism and Shaktism among numerous other traditions, and a wide spectrum of laws and prescriptions of “daily morality” based on karma, dharma, and societal norms. Hinduism is a categorisation of distinct intellectual or philosophical points of view, rather than a rigid, common set of beliefs.

Hinduism is traditionally considered to have two liturgical languages, Sanskrit and Tamil. Sanskrit is the language of the Vedas, Bhagavadgita, Puranas like Bhagavatham, and the Upanishads, and various other liturgical texts such as the Sahasranama, Chamakam and Rudram. It is also the tongue of most Hindu rituals.