Everything has an end. ~ Tanzanian Proverbs

The death that will kill a man begins as an appetite. ~ Nigerian Proverbs

Who wills the end, wills the means. ~ Traditional Proverb

He who believes his wife too much will regret it in the end. ~ French Proverb

If we do not change our direction, we are likely to end up where we are headed. ~ Chinese Proverb

He who follows advice from women will end up in hell. ~ Hebrew Proverb

Only death itself can end our hope. ~ Arabian Proverb

The longest day soon comes to an end. ~ Traditional Proverb

The end of mirth is the beginning of sorrow. ~ Dutch Proverb

Regret, like a tail, comes at the end. ~ Ethiopian Proverbs

Everything has an end with the exception of God. ~ Dutch Proverbs

A man comes from the dust and in the dust he will end–and in the meantime it is good to drink a sip of vodka. ~ Yiddish Proverb

He, who always wants the last word, ends up talking to himself. ~ Breton Proverb

It takes two to quarrel, but only one to end it. ~ Spanish Proverbs

When your wine is finished, conversation ends; when your money has been spent, you lose your friends. ~ Serbian Proverbs

We all end up in a single bed sooner or later. ~ Traditional Proverb

Everything has an end except a sausage, which has two. ~ Danish Proverbs

All good things must come to an end. ~ Traditional Proverb

Everything ends in weeping. ~ Yiddish Proverbs 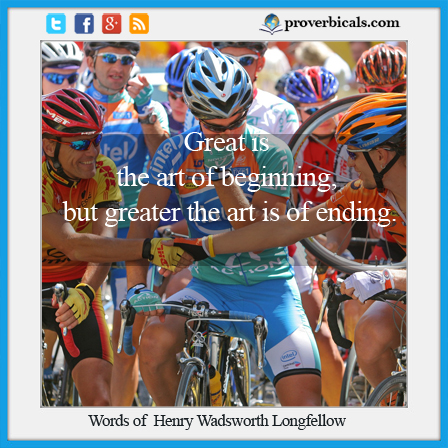 The world is round and the place which may seem like the end, may also be the beginning. ~ Ivy Baker Priest

It is easier to resist at the beginning than at the end. ~ Leonardo Da Vinci

It began of nothing and in nothing it ends. ~ Caius Cornelius Gallus

Every exit is an entry somewhere else. ~ Tom Stoppard

The truth is at the beginning of anything and its end are alike touching. ~ Yoshida Kenko

The beginning is the promise of the end. ~ Henry Ward Beecher

I make so many beginnings there never will be an end. ~ Louisa May Alcott

The end is never as satisfying as the journey. To have achieved everything but to have done so without integrity and excitement is to have achieved nothing. ~ Author Unknown

Persistent people begin their success where others end in failure. ~ Edward Eggleston

The quickest way of ending a war is to lose it. ~ George Orwell

Everything that has a beginning comes to an end. ~ Quintilian

Men marry to make an end; women to make a beginning. ~ Alexis Dupuy

Begin at the beginning and go on till you come to the end: then stop.~ Lewis Carroll

Every new beginning comes from some other beginning’s end. ~ Marcus Annaeus Seneca

Now this is not the end. It is not even the beginning of the end. But it is, perhaps, the end of the beginning. ~ Winston Churchill

Begin with the end in mind. ~ Stephen R. Covey

Ends and beginnings—there are no such things. There are only middles. ~ Robert Frost

It’s not over until it’s over. ~ Yogi Berra

The happy ending is our national belief. ~ Mary McCarthy

Men perish because they cannot join the beginning with the end. ~ Alcmaeon

Laughter is not at all a bad beginning for a friendship, and it is far the best ending for one. ~ Oscar Wilde

Nothing ends nicely, that’s why it ends. ~ Tom Cruise

The time-honored bread-sauce of the happy ending. ~ Henry James

In the life of the spirit there is no ending that is not a beginning. ~ Henrietta Zolde

Great is the art of beginning, but greater the art is of ending. ~ Henry Wadsworth Longfellow