A foolish man may be known by six things: Anger without cause, speech without profit, change without progress, inquiry without object, putting trust in a stranger, and mistaking foes for friends. ~Arabian Proverbs

A man who develops himself is born twice. ~Argentine Proverbs

When your fortune improves, the columns of your house appear to be crooked. ~Armenian Proverbs

Being young is a fault which improves daily. ~Swedish Proverbs

Before you prepare to improve the world, look around your own house three times. ~Chinese Proverbs

Most people are in favor of progress, it’s the changes they don’t like. ~ Saying

If thy strength will serve, go forward in the ranks; if not, stand still. ~ Confucian Proverb

Progress is mediation that comes swiftly for those who try their hardest. ~ Saying

When a blind man carries a lame man, both go forward. ~ Swedish Proverb

Little by little, a little becomes a lot. ~ Saying

I may not be there yet, but I’m closer than I was yesterday. ~ Saying

To change and to improve are two different things. ~German Proverbs

Work improves the harvest better than the field itself. ~Spanish Proverbs

You cannot propel yourself forward by patting yourself on the back. ~ Traditional Proverb

He that will not look forward must look behind. ~Gaelic Proverbs

Better retreat in honor than advance in disgrace. ~Serbian Proverbs 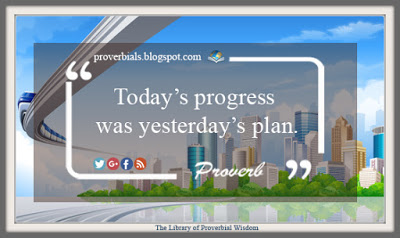 Progress: Ten Reasons to Look Forward to the Future. ~ Bookpreview

Sayings about Saving The saving man becomes the free man. ~Chinese Proverbs Give nine,
Leadership shortens life. ~ Hebrew Proverb He that would be a leader must be a bridge. ~ Welsh
The Turkish Proverb advised that a single bad experience is worth a thousand threats!.
It is said that a short retirement urges a sweet return! This page is
The Zulu proverb says"The rich are always complaining!"... This page is a compilation of