Give nine, save ten. ~Iranian Proverbs

What you save is, later, like something found. ~Yiddish Proverbs

Do not be like a miser who saves for those who will bury him. ~Malagasy Proverbs

A penny saved is better than a florin earned. ~Dutch Proverbs

He who saves up for another day has no trust in God. ~ Chilean Proverb

Whatever you save is also earned. ~German Proverbs

Save money and money will save you. ~Jamaican Proverbs

For age and want save while you may, no morning sun lasts a whole day. ~United States Proverbs

Save three pieces of gold and the fourth one will fall into your lap. ~Croatian Proverbs

He who works has much; he who saves, still more. ~ Yugoslavian Proverb

A penny saved is a penny earned. ~ Traditional Proverb

From saving comes having. ~Scottish Proverbs

In a fight the rich man tries to save his face, the poor man his coat. ~Russian Proverbs

Wasting is a bad habit, saving is a sure income. ~ Dutch Proverb

Save a little money each month and at the end of the year you’ll be surprised at how little you have. ~ Ernest Haskins

Savings, remember, is the prerequisite of investment. ~ Campbell R. McConnell

I advise everybody not to save: spend your money. Most people save all their lives and leave it to somebody else. Money is to be enjoyed. ~ Hedy Lamarr

The less money you owe, the less income you’ll need and the less you’ll have to save for tomorrow. ~ Suze Orman

If saving money is wrong, I don’t want to be right! ~ William Shatner

Save for retirement. Start from your first paycheck. ~ Chanda Kaushik

Economy is a savings-bank, into which men drop pennies, and get dollars in return. ~ Henry Wheeler Shaw

A penny saved is two pence clear, a pin a day’s a groat a year. ~ Benjamin Franklin

I used to say why save money if I’ll die tomorrow, I haven’t died yet and I have nothing to survive on. ~ Bangambiki Habyarimana

A penny saved is worth two pennies earned . . . after taxes. ~ Randy Thurman 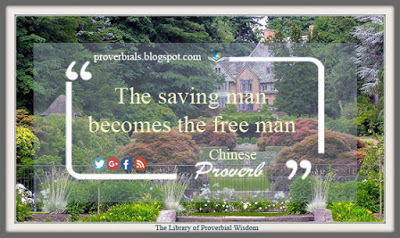 Sayings about Progress A foolish man may be known by six things: Anger without
Leadership shortens life. ~ Hebrew Proverb He that would be a leader must be a bridge. ~ Welsh
The Turkish Proverb advised that a single bad experience is worth a thousand threats!.
It is said that a short retirement urges a sweet return! This page is
The Zulu proverb says"The rich are always complaining!"... This page is a compilation of