Sadness is a valuable treasure — only discovered in people you love. ~ Malagasy Proverbs

Patience in the household is a real treasure. ~ Chinese Proverb

Only a certain amount of flowers and jewels are beautiful. ~ Tibetan Proverbs

A nation’s treasure is its scholars. ~ Yiddish Proverbs

Who finds a faithful friend, finds a treasure. ~ Jewish Proverbs

Learning is treasure no thief can touch. ~ Chinese Proverb

If you carry treasure, don’t travel at night. ~ Japanese Proverbs

Sorrows are valuable treasures that you only show to your friends. ~ Spanish Proverbs

With tender words you have less luck with a woman than with jewels. ~ Berber Proverb

All the treasures of earth cannot bring back one lost moment. ~ French Proverb

A donkey is a donkey though it may carry the Sultan’s treasure. ~ Lebanese Proverbs

The house with an old grandparent harbors a jewel. ~ Chinese Proverb

Sorrow is like a precious treasure, shown only to friends. ~ African Proverb

Learning is a treasure that will follow its owner everywhere. ~ Chinese Proverb

An old man in the house is a burden, but an old woman is a treasure. ~ Hebrew Proverb

Treasure is a concentration of riches, often those that originate from ancient history, considered lost and/or forgotten until being rediscovered. ~ More about Treasure from Wikipedia 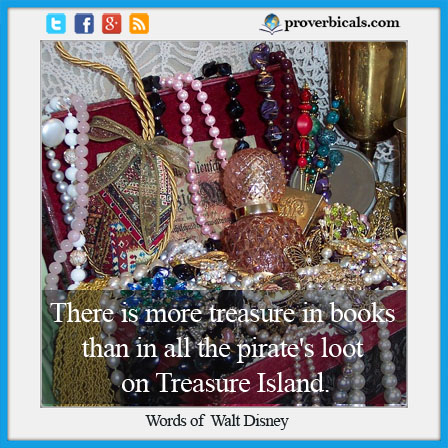 Next to the Word of God, the noble art of music is the greatest treasure in the world. ~ Martin Luther

Treasure the things about you that make you different and unique. ~ Karen Kain

Colour is what gives jewels their worth. They light up and enhance the face. Nothing is more elegant than a black skirt and sweater worn with a sparkling multi-stoned necklace. ~ Christian Dior

A book store is a treasure chest. Every time you walk in one, you strike gold. ~ Regina Brett

I would rather be adorned by beauty of character than jewels. Jewels are the gift of fortune, while character comes from within. ~ Plautus

The most luxurious possession, the richest treasure anybody has, is his personal dignity. ~ Jackie Robinson

A good action is never lost; it is a treasure laid up and guarded for the doer’s need. ~ Pedro Calderon de la Barca

A faithful friend is a strong defense, and he that hath found such a one hath found a treasure.~ Bible

The home should be the treasure chest of living. ~ Le Corbusier

The words that enlighten the soul are more precious than jewels.~  Hazrat Inayat Khan

The essential lesson I’ve learned in life is to just be yourself. Treasure the magnificent being that you are and recognize first and foremost you’re not here as a human being only. You’re a spiritual being having a human experience. ~ Wayne Dyer

Adversity is the diamond dust Heaven polishes its jewels with. ~ Thomas Carlyle

Each man in his way is a treasure. ~ Robert Falcon Scott

If you want to be perfect, go, sell your possessions and give to the poor, and you will have treasure in heaven. ~ Jesus Christ

A good friend who points out mistakes and imperfections and rebukes evil is to be respected as if he reveals a secret of hidden treasure. ~ Buddha

Gold is a treasure, and he who possesses it does all he wishes to in this world, and succeeds in helping souls into paradise. ~ Christopher Columbus

Our nation’s children are our greatest asset and our most precious treasure. ~ Christopher Dodd

Treasure the love you receive above all. It will survive long after your good health has vanished. ~ Og Mandino

Guard well within yourself that treasure, kindness. Know how to give without hesitation, how to lose without regret, how to acquire without meanness. ~ George Sand

To be satisfied with a little, is the greatest wisdom; and he that increaseth his riches, increaseth his cares; but a contented mind is a hidden treasure, and trouble findeth it not.~ Akhenaton

I think humor is important for all of us, and a great comedian is a great treasure. ~ Leila Josefowicz

Like a precious family heirloom, freedom is not just ours to enjoy, but to treasure, protect, and pass on to future generations. ~ Os Guinness

We have for a long time neglected our children. They are our richest treasure. We must give them time, attention and the love of our pure, unselfish hearts. ~ Dada Vaswani

One man’s trash is another man’s treasure, and the by-product from one food can be perfect for making another. ~ Yotam Ottolenghi

Happiness is your own treasure because it lies within you. ~ Prem Rawat

For those without money, the road to that treasure house of the imagination begins at the public library. ~ Pete Hamill

No one has yet realized the wealth of sympathy, the kindness and generosity hidden in the soul of a child. The effort of every true education should be to unlock that treasure.~ Emma Goldman

Treasure your relationships, not your possessions. ~ Anthony J. D’Angelo

Many a treasure besides Ali Baba’s is unlocked with a verbal key. ~ Henry Van Dyke

If love is the treasure, laughter is the key. ~ Yakov Smirnoff

Where a man’s heart is, there is his treasure also. ~ Saint Ambrose

Where your treasure is, there will your heart be also. ~ Bible

The wise man does not lay up his own treasures. The more he gives to others, the more he has for his own.~ Lao Tzu

Truth is the property of no individual but is the treasure of all men.~ Ralph Waldo Emerson

Success, happiness, peace of mind and fulfillment – the most priceless of human treasures – are available to all among us, without exception, who make things happen – who make “good” things happen – in the world around them. ~ Joe Klock

Memory is the treasure house of the mind wherein the monuments thereof are kept and preserved. ~ Thomas Fuller

Knowledge is a treasure, but practice is the key to it. ~ Thomas Fuller

It is by going down into the abyss that we recover the treasures of life. Where you stumble, there lies your treasure. ~ Joseph Campbell

The true treasure lies within. It is the underlying theme of the songs we sing, the shows we watch and the books we read. It is woven into the Psalms of the Bible, the ballads of the Beatles and practically every Bollywood film ever made. What is that treasure? Love. Love is the nature of the Divine. ~ Radhanath Swami

A faithful friend is a strong defense; And he that hath found him hath found a treasure. ~ Louisa May Alcott

There is more treasure in books than in all the pirate’s loot on Treasure Island. ~ Walt Disney